Walt Disney was a man who believed in innovating and always moving forward, so it should come as no surprise that changes are always being made around the Walt Disney World Resort. Today, a big and emotional change is happening as we say farewell to DisneyQuest. 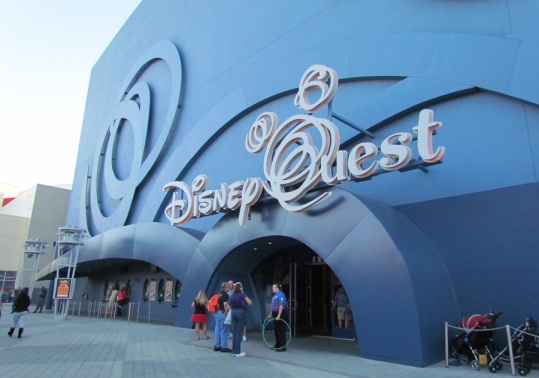 DisneyQuest opened on June 19, 1998 as a part of a large expansion to Downtown Disney West Side. When it opened, DisneyQuest was ahead of its time. Spawning over 100,000 square feet and five floors of electronic games and virtual attractions, there was something for everyone. Guests could paddle down the river on a virtual Jungle Cruise, score big points on the life size pinball game Mighty Ducks Pinball Slam, jump behind the wheel on one of eight linked Daytona USA racing consoles, and learn to draw popular Disney characters at Animation Academy. Guests could even design and experience their very own roller coasters on Cyberspace Mountain, or practice their aim on Buzz Lightyear’s AstroBlasters.

Few Disney attractions hold as many positive memories for my family as Buzz Lightyear’s AstroBlasters. Best described as a cross between bumper cars and dodge ball, players would board their enclosed vehicle, collect asteroids (AKA foam balls), and fire them at other vehicles to disable them. This attraction wasn’t one we would typically put on our list, but all of that changed after our first time playing. AstroBlasters became one of our favorite attractions in all of WDW.

Personally, I love this ride because my daughter loved it and it was something that we could do together, as a team. I was the pilot and she was the very hungry gunner. We didn’t just play, but we were students of the game. We studied the best way to maneuver around the arena, most efficiently fire our asteroids, and even pick out newbies to shoot at. We loved the disappointment on their faces as their vehicle would light up and spin out of control. Occasionally this would result in retaliation, but that was the price of playing. We would spend hours and hours in those ride vehicles, stopping only for the occasional mango-strawberry smoothie, or to take a picture picking Buzz Lightyear’s nose on the rules sign in front of the game.

All of these times are just memories now as we are forced to say “so long” to this once iconic place. Unfortunately, years of falling into disrepair, and more technologically advanced attractions going in elsewhere around property, have driven attendance numbers down and have forced DisneyQuest to close its doors for the final time. However, in true Walt Disney fashion, a new attraction is planned for this space on the Disney Springs West Side. Work will begin on a multi-year transformation from DisneyQuest to the NBA Experience. According to the Disney Parks blog, the NBA Experience at Walt Disney World Resort will be, “a one-of-a-kind basketball-themed experience featuring hands-on activities that put guests of all ages right in the middle of NBA game action. There will be immersive NBA video productions and numerous interactive experiences, as well as a restaurant and a retail store.” On the heels of news that Walt Disney World will be the jersey sponsor of the Orlando Magic, this attraction appears to be a perfect fit and will appeal to basketball fans young and old.

View all posts by Jennifer

1 thought on “Farewell to DisneyQuest”

Welcome to Word of Mouse! Thanks for stopping by and sharing in our love for all things Disney!